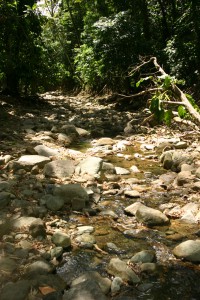 Looking at the tourists map for Tobago there are a few waterfalls indicated. These are actually just some of the waterfalls that can be found in Tobago. I found this out with some friends who wanted to go to the waterfall in Castara. Looking on the map nowhere to be found. After a guarantee from a local friend that there is actually a waterfall we decided to give it a go.

Once in Castara asking for the waterfall the people were quite helpful in pointing out how the waterfall could be reached. Straight behind the local football field there is a track that makes a left bend along the river. As with any waterfall you really just follow the river, cross it a few times – quite easy in dry-season – and about 5 minutes later you are already there. 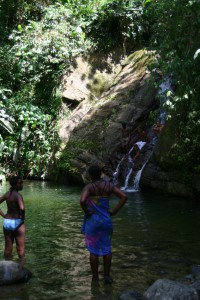 The waterfall itself might be a little bit less impressing than the well know waterfall of Argyle. The fact that it’s not well know makes that it’s less visited. We went on a sunday and after being there for some time with some local boys swimming we were joined by other locals who started there outdoor cooking a little down river. Besides that it was quite and – opposed to Argyle – no entrance fee and a real easy walk (to reach the first level of the falls). 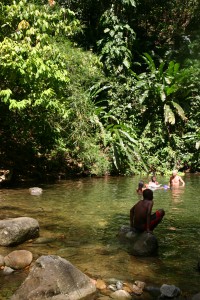 Local boys told us that there are more than 10 to 20 other falls if you followed the river upstream. The last one should be the biggest and would take a three day walk. This might be a little exaggerated seeing that the whole of Tobago is not more than 12 kilometers wide, but the rainforest is quitte dense at Castara, so for sure it might make an interesting climb. We weren’t equipped to climb to next levels that day, so we left this for another time.

As you can see on the pictures a real nice pool to the bottom of the falls for swimming. Quite cool compared to swimming in the sea, and full with fish. If you already have a chance to get bored on Tobago this is a worthwhile visit. Make sure to either bring or order food in advance on sunday’s though. It turned out to be a challenge to buy some food that day.